Get ready for a unique set of strip lights with RGBIC lighting and white lighting for the brightest lighting to help you study or host special events with family and friends.

The product will ship 1 business day after purchase (except for pre-ordered products), and delivery will take 5-7 business days. All orders will be dispatched from our US warehouse.

We offer a one-year limited warranty from the date of purchase for Govee LED Strip Light M1.

Comparison:
- M1 has 60 LEDs per meter (other models top out at 30 LEDs per meter)
- M1 has over 3x as many control chips
- M1 has over 3x as many customizable segments (50 customizable segments instead of 15)
- M1 uses 4x as much power (72 watts compared to 18 watts)
- M1 has 2x the lumen (brightness) output according to the specs but the individual diodes seem brighter so I suspect it’s more than 2x
- M1 can be joined to another M1 segment without soldering
- M1 is designed to be cut to different lengths (Govee recommends against cutting other RGBIC models)
- M1 has significantly improved “white” light (it’s still blueish but a big step up)

Review:
The M1 is significantly brighter, has more customization and better color blending. It’s cheaper than comparable products from other manufactures. The ability to cut the strip is a nice plus and I was able to solder cut pieces back on easily without damaging the strip. Overall, I think the price tag is reasonably justified given the increased number of integrated controllers (chips), LEDs, and overall quality.

My only critique so far:
White color is improved, although I would have liked to see dedicated white diodes given the price. Blue-white is still noticeable and definitely something Govee can improve on.

Overall, 4.5 out of 5 stars for value. Fix the white issue and this would be a great product.

The unboxing was easy and was surprisingly pleasant. The light strip itself felt premium and had a thick protective coating. I bought this strip as a test for use in cove lighting. It's currently used on the back of the desk with a T1 on the TV. It's easy to cut at the solder pads and had no issues extending or shortening the strip for my needs. Easy to connect to the app. Great on brightness and color saturation and the effects are incredible. The ability to fully create your own effects in the DIY section is also a huge plus. Govee keeps releasing new features regularly, the latest (scenic dreamview) really made these LED strips shine when combined with an entire room of Govee products. Best Light Strip I've ever come across. I'll definitely be buying another to add the cut off section to in order finish up the movie theater! 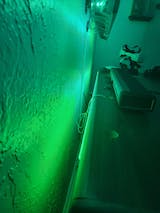 you guys who are saying this is too expensive or doesn't do anything special should actually figure out what your talking about before writing a review. please watch the youtube review of this by chris maher, "GOVEE M1 - The BEST Plug and Play LED Strip EVER MADE! They FINALLY Did it!"